Message—Is the God of the Old Testament the same God as the New Testament? Part 1

“But is this understanding of God from the Bible correct? Did God deal with anger issues in the Old Testament… and then decided along the way to have a change of heart? Well, I want to answer this question, is God schizophrenic in the Bible, or does His character and nature remain the same in both the Old Testament and New Testament?”
Message Transcript

“The old adage goes, “A picture is worth a thousand words.” That saying is so apropos since a photograph can tell a complete story with one simple glance. The first photographs of Jerusalem were taken in 1844 when French photographer, Girault de Prangey, captured the city for the first time. To my surprise, these pictures of Jerusalem from 170 years ago cast a dark shadow on Jerusalem that I did not expect to see. De Prangey’s pictures told a story worth a thousand words, not about a Jerusalem of God, but about a Jerusalem forgotten.”

“This week I’m dealing with the question of Jerusalem, and whether or not it has always been a sacred site to the Muslims throughout history.” 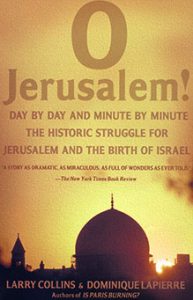 In spellbinding detail, this 1972 classic meticulously re-creates the Jewish people’s historic struggle to create a homeland in the Middle East after World War II.

“Many Israelis believe that just because they live in Israel, God will bless them, regardless of disobedience. I recently met some who believe this way. I told them, “My friends, it is not enough that you live in Israel. Deuteronomy 12:1 states, ‘These are the statutes and judgments which you [must] observe in the land which the Lord God is giving you to possess, all the days that you live on the earth.’ Because we are the Chosen People, we must be an example to the nations. We must not believe that simply because we live in Israel, we are free to do whatever we like.””